I feel like I should start a #TimesUp movement. lol! 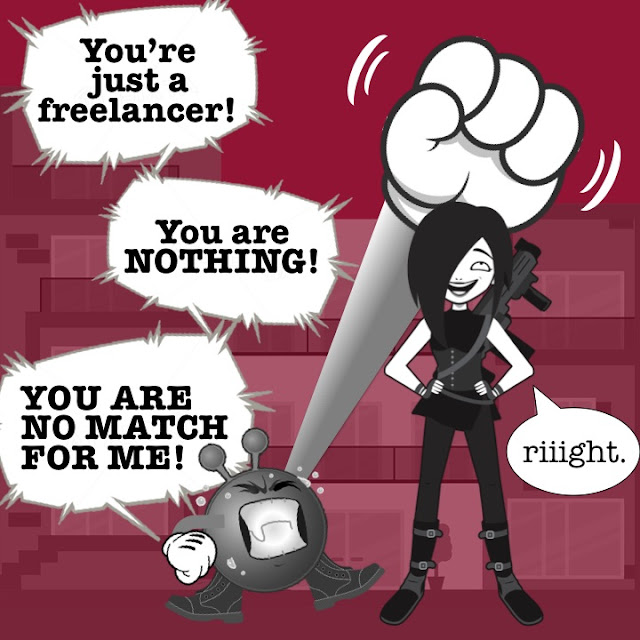 Freelancers here have suffered discrimination for quite a while now. It's not the same as in New York where freelancers are starting to gain new ground as a respectable work force under the category of a gig economy. Here at home, well, we're still the outsiders --skirting the edge of an industry. Sometimes, an amazing portfolio isn't enough. The moment you say you're independent with no affiliation to those big-named companies --RED FLAGS, WHAT'S UP!

Sucks, huh?
But, honestly, there are 2 parties to blame.

NUMBER ONE. the client. He may have worked with big people before so he assumes your work is nowhere near these big-named, highly-respected, elite crowd. Or, maybe he just wants to flex his client-ish muscles to make up for some trauma he's suffered with his last project or with this last freelancer. Or, he could just be going through some mad personal issues and pouring it all on you.

Either way, there's also NUMBER TWO --YOU. Unfortunately, there are some freelancers who do allow themselves to be stepped on. This sets the precedent that this is okay for all of us. Oh, please. Have some balls of gold. You took on freelancing to be your own boss. Not to be bossed around.

You know what they say: You're only as small as you allow yourself to be. So, be the bigger person. Do awesome work. Defend like a boss. Kill them with professionalism. Make them realize how much of a force you are to reckon with by proving yourself worthy of this project and the next. If despite all this and your client's attitude doesn't sway, yes, you can fight back. As long as you're in the right. And as long as there's no bloodshed. Uh-huh.

Us freelancers, we cannot always expect the respect on the get-go. Unless you've already built your reputation as an awesome indie professional --which is what you're exactly aiming for.
But first, respect yourself.
Email Post
Labels: be the bigger person discrimination freelancer misconception professionalism raketips respect self-respect