I don't do New Year's Resolutions.  I'm more of a go-with-the-flow, happy-go-lucky, devil-may-care kind of person.  Translation:  I haven't an iota where the hell I plan to take my life.

But, 2012 --being the so-called year when the world is scheduled to be reduced to space rubble-- has inspired me to finally (final... pun... hehe) make a shortlist of some broad stroke promises I will most probably not keep.  However, I am hoping that by publicly announcing them like this, it might just push me to fulfill at least... er... 30% of the list before the year (or... life as we know it... haha!) ends.  I'm not being cheap with that figure.  I'm being realistic.  I know myself that bad. 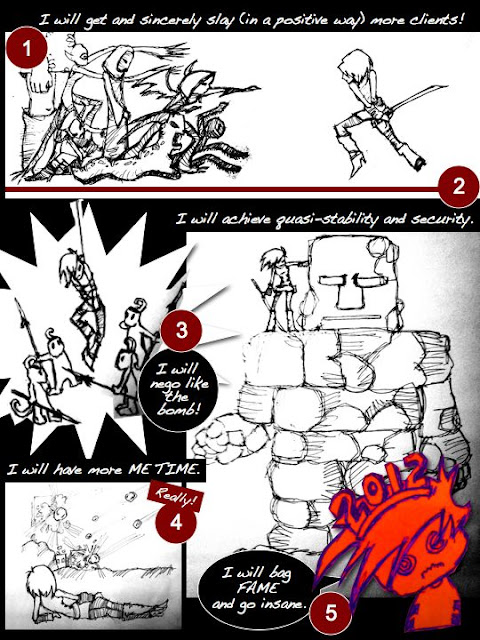 Ooohkaaay, enough sarcasm.  The truth is, I do plan to make a big thing out of my freelancing career this year.  Just because I feel it's time for some real big changes now.  The safety lock has officially come undone.
I was a wimp and a hermit in 2010.  I became stronger, bolder, smarter, and happier in 2011.  For 2012, I'm more than fueled to take on a brand new crazy, bumpy ride.
Hope you Raketistas are getting that pumped up personal vibe, too.