Confessions of a non-patriotic movie goer.
My last Pinoy film dates back like eons ago.
Don't ask.

Confessions of a severely twisted child dreamer.
"When I grow up, I wanna be a vampire."
The nuns of Dominican College didn't like that.

Confessions of a frustrated forward-thinking screenwriter.
Wouldn't it be great if we milked (or bled out) OUR mythical murderers?  Hollywood has Twilight, Underworld, Van Helsing.  But, heck, we have the Aswang, the Manananggal, the Tikbalang, the Kapre!  Awesome creatures that have graced our comic stands and plagued our imaginations and fears the minute we spend the night out of town!  Our monsters have great potential!  Let's make a movie NOW!!! 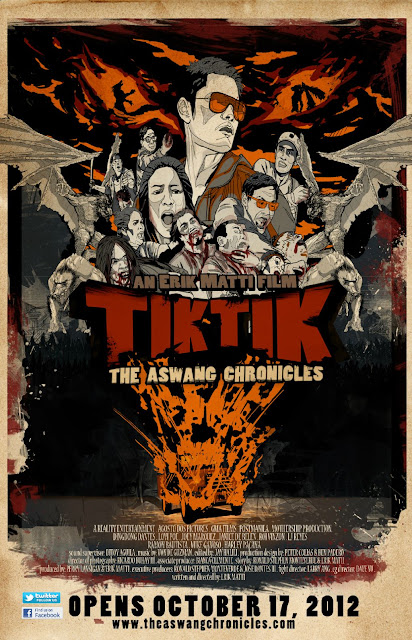 Finally, someone gets it!  And it just had to be Erik Matti (whom Kalakal Kid and I have worked with in a number of TV ads in our colorful past).  You, sir, rock immensely.  Erik Matti's brilliant mind not only played out the aswang story and history to the hilt, but he also set it in a rural backdrop of color-manipulated eerie.  Effective way of getting a certain mood and tone across.  He also did the unthinkable feat of peppering the flick with effects that --in my humble opinion-- finally catapulted Pinoy film making to the age of Optical/Mechanical/Digital Movie mania!

Too late the hero, you say?  Oh, Erik Matti made up for that delay, a gazillion-fold!  This will sound biased and bash-worthy, but really, when it comes to visions like this --nothing beats an Advertising background's eye.  Just watch this trailer and drool.  Or spew blood.  Whatever it is that gets you going.

Casting-wise, I'm no fan of Dingdong Dantes --but he looks promising wielding that goddamn buntot-page at the nasty intestine eaters.  LJ Reyes also seems to do justice to her petite yet feisty aswang persona.  And Joey Marquez, your comedy and mayoral background just didn't save you from your bloody convincing wrench-the-heart-out-of-an-aswang awesomeness.