Karma on the internet is served at 95.5 megabits per second. That instant. Thanks to the magic that is Social Media and its reckless usage thereof.  In fact, if you’re not careful, the simple act of ranting online can be akin to online suicide. How so? Please refer to the diagram below. 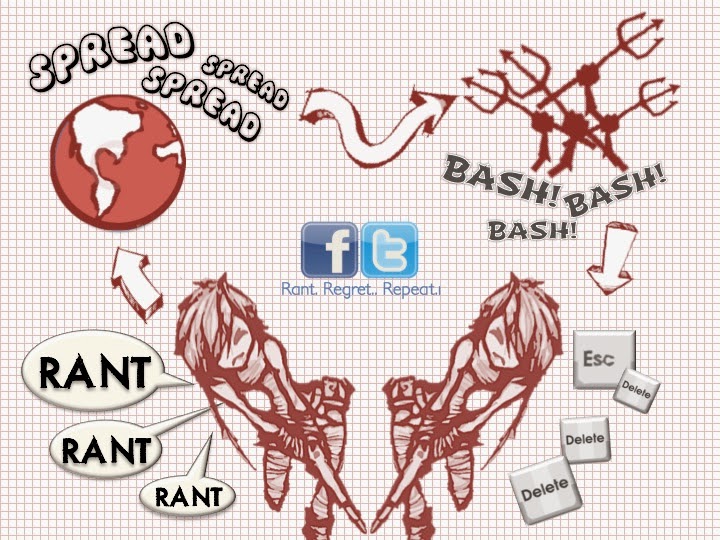 It all starts with…
ANONYMITY.
One perk when getting a Facebook and/or Twitter account is the anonymity that comes with it. You grow a massive pair of balls when you hide behind a username. But it’s a 2-way street. If you’re brave enough to rant on a public figure/entity/event/issue, someone hiding behind another username is bound to be brave enough to rant back at you. Be reminded that your opinion is not always the opinion of the public.

VIRAL.
And when I say’public’, I mean the World Wide Web Public. When you rant on Facebook or Twitter, you rant to the world. Powered by that amazing little ditty called ‘going viral’. Your rant can get shared, reposted, reblogged. Oh, and when that happens, it spreads worse that the common flu virus. Because it leads to…

CYBER BULLYING.
When someone jumps at you for dissing a public figure/entity/event/issue, it’s an invitation for a free-for-all, a feeding frenzy. After all, most netizens have an angry mob mentality. Just by sharing an unpopular two-cents, you can get ganged up on by bad comments and harassed from here to the moon.

EXPOSE.
Then you get stripped bare. Online rape is when online nerds who have nothing better to do put their hacking skills to work in order to expose your true identity. Suddenly, your Linkedin account is linked to your venomous Tweet rant. In a blink of an eye, you’re anonymity is gone. You’re an open book, and a sitting duck.

PERMANENT.
The irony of it all is that the Internet is so unforgiving. No matter how hard you try to clean up the mess you started, your original rant will be forever etched on your social network’s archives. It’s permanent. It's forever. Just Google it, and it will resurface like a bad, bad dream. And so your online harassment goes on…

Repeat cycle, as you wish.

It’s a good thing there are people who actually strive to give your Facebook timeline and Twitter feed a more responsible kind of updating. For that one, refer to Sykes. Sykes is the call center that embraces social media as the new means of perfecting customer service and enriching customer relationship. Social networking has never been more enjoyable.