How bad is that title?!!
Apologies to Vanilla Ice and his most awesome shoulder pads and fancy footwork.

Anyhoo, reality check:  I've been going solo for years now that I've become awkward when it comes to teamwork.  I'm used to crafting my own strat now, going complete adman when conceptualizing, cooking up the visual treatment along with the words I put in an execution, dabbling in production details.

So when a project called for a collaboration among other freelancers, I jumped in without a parachute.  Excitedly, I started throwing in suggestions for a better key message.  I started thinking of pictures, production values, and giving pegs.  I started being me.  Much to the ire of my partners.  I'm sure they were saying, "What a ho she is!  She's like totally manning the show!  She's like Britney Spearsing it and we're just her back up dancers!  Duh!" 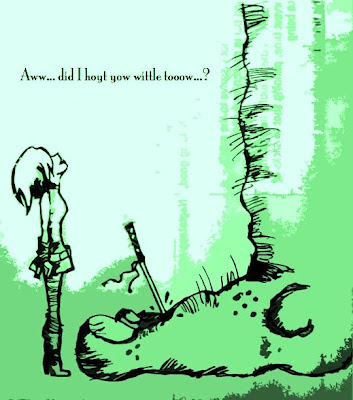 It became ugly so I'm not going into details.  But I do come with a tip.  Learn to shift gears when the situation calls for it.  I know, all freelancers are natural Gung-hos and that's a good thing.  But when the arrangement sets you with a concrete title, you live up to just that.  They called you in to be a writer --so write.  They called you in to be an AD --so illustrate.  Having initiative is a fabulous trait (like I always say!), but only when you're sure you're there to impress and get more business, only when you're doing this for yourself.  But when it's a collaboration, have initiative only within your area of concern.
Sure, you can throw in suggestions ... but you listen to your partners, too.  Wait for your turn.  Group effort.  Ooh, sounds alien?  Come on, you've done this in a lot of agencies before!

Do not step on toes.  Do not bruise egos.  Do only what you're getting paid for.
Keep Vanilla Ice in mind.  It's 'Collaborate and listen'.  Not 'Collaborate and railroad'.
Email Post
Labels: collaboration initiative teamwork