"Now how in the world is she going to connect a pro-wrestler's passing to freelancing or advertising?", you wonder with a cocked brow.

It will be tough.  But I will try. 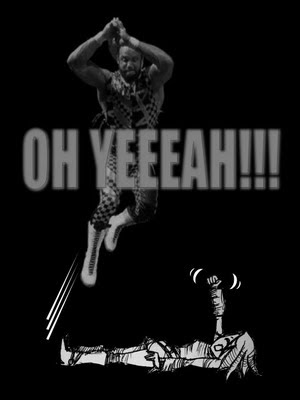 Macho Man Randy Savage is the epitome of my childhood.  He's the glue that kept me and my brothers tight.  Watching WWF was our life.  We knew it was all fake (yes, we did!), but the choreography was majestic.  The way they created stories behind the character of each pro-wrestler was even more amazing.  It was theater.  It was a client presentation.
Hah!  Told you I'd find a way!
Of all the pro-wrestlers, Macho Man was the character that had the utmost flair of an impressive presentation.  Loud clothes, loud control issues,  even louder "Oh yeeeahh!" byline.  Selling yourself and your concept with the balls of an artist.
Speaking of artistry, Macho Man had depth, too.  A mystery.  What were the egomaniacal thoughts behind those shades?  Some call it crazy.  Some call it genius.  In advertising, we call that a teaser for even more brilliance to come.
And boy, did Macho Man have the moves!  So you know the flamboyance wasn't all for show.  The signature Top Rope Elbow Drop floors even the All-American good boy, Hulk Hogan.  But as you would have it, Hulk Hogan's 1-2-3 Arm Shake always managed to make Mr. Wrestling Favorite win, because it was in the script.  Always.  Classic big agency clout versus small agency hunger or solo freelancer starvation.  Never mind if Macho Man had more muscle.
His obsession for Miss Elizabeth (his manager and main squeeze in the WWF series) also showed ferocity in claiming authorship and defending one's material --in an advertising person's case, 'til it's produced properly.
It's all about passion and Macho Man Randy Savage had that.  Us advertising people have that.  So even as we leave the industry, we will be remembered for our flair, our skills in the field, our bylines.
Just like Macho Man.
So there. :P
Email Post
Labels: advertising freelancing Macho Man Randy Savage