Hmmm... I've had a handful of those throughout my career.  Let's see...

Sexism.  An ex-boss forbade me from writing for a car company client because I'm a girl.  And girls know zilch about automobiles.  Or so he says.

Ageism.  Despite falling in love with my portfolio, a client refused to give me his web project because I wasn't young enough to write for future stuff like technology.

Rankism.  An old friend didn't want to hire me as his writer because I held a higher position than he did in the old days.  Up to now, this still confounds me.

Egoism.  Kinda like a jump-off from Rankism.  A friend totally didn't want me to be her colleague because she says I might outshine her.  Yes, she actually said that.

Fashionism.  A client thought I was rude for presenting creative materials to him --a doctor-- wearing a black dress and black boots. Apparently, people should be in formal wear when in the presence of honorable med men and women.

The black dress was decent, by the way.  And my boots were Linea Italia Glams!  Hmpf! 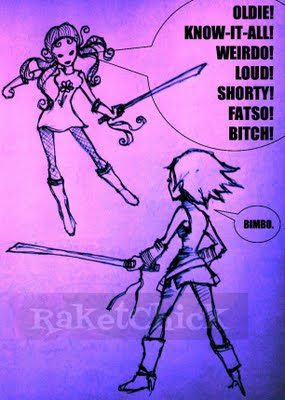 Fact is, man is naturally judgmental.  I call it Impressionophobia.  What could've been a good working relationship is severed even before it's begun simply because you weren't packaged the expected way.  In the work place, first impression kills everyday.  You're not even allowed a fighting chance.  Thanks to -ists who champion -isms.

Prejudice here.  Discrimination there.  At the end of the day, it's their loss, not yours.  As long as you have the brains, you're free to succeed and be appreciated elsewhere.

My brainy quip for the day:  If they can't see beyond your surface, then they don't deserve your depth.
Email Post
Labels: ageism discrimination in the work place egoism sexism