Does anyone even remember Invader Zim?  No?  A little background is in order then.

Invader Zim was the coolest thing ever aired on Nickelodeon in 2001.  But after a season and a half and a pull-out without warning, you'd think I'm crazy to say that.
Zim is (was!) a strong-willed outcast from the planet, Irk.  Irk exists to invade other planets.  And so, Zim --well-marinated in his false sense of greatness-- wrongly rises up to the challenge.  This subsequently gets him thrown into a fake invasion mission to Earth just to get him off the Irken leaders' royal backs.  What follows is a string of episodes with Zim battling all odds to please his leaders.  And losing.  Episode after episode.  Until the show was finally dropped like a sad, sad, lukewarm potato.

So what's my point?  Zim is a prime candidate for that all-important tip: 'Choose Your Battles'.  He knows he's great --and he is.  He just tries too hard.  And he does it to please someone else.  Not himself. 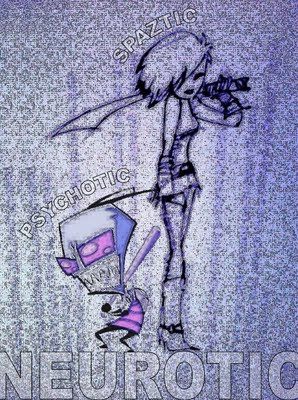 Moral Lesson:  When tossed by a higher power into a huge mess (and usually, this happens to us lowly lots), you should be a tad NEUROTIC.  It always helps to have a personal feeling of grandeur when knee-deep in challenging situations.  You're not doing this for your boss, your client, or the all-powerful Universe.  This is all you.  That's called self-confidence for you mere mortals.

But you shouldn't be PSYCHOTIC to the point that you lose sight of the long term plan either.  Remember that professional relationships are darn fragile.  When you push for something you believe in in a manner that's more than legally acceptable, that's when you become obnoxious, defocused, engaged in verbal fisticuffs, and a failure.  That's how Zim is (was!).

What you should be is SPAZTIC.  Fiery and feisty one minute... lying low the next... throwing in the towel when you finally need to.  That's called proper negotiating for you mere mortals.  You can still fight for that strategy, that concept, that production cost.  But do consider your ground and the other party's ground.  And play it from there.
If you do the intergalactic railroading bit, that's when you become an outcast.

Sadly, not all projects are invasion plans.

Still... I do love me a little Zim every now and then.
Email Post
Labels: choose your battles Invader Zim negotiation NIckelodeon