The reason why I got into writing is because I don't like talking.  I like presenting.  I live for that onstage performance, being the complete attention whore that I am.  But talking, discussing, brainstorming, negotiating, anything that involved people talking back to me for a long period of time --if I could go through a day without that, I'd be happy.

I'm not shy.  I'm not a nerd.  I'm just not much of a people person.  It takes an excruciating while before I warm up to people and actually hold conversations with them.  Mostly because I don't have the patience.  Uh, no, I'm not ADHD either.  I think.

But that hurdle was easily jumped over with very little grace last week when I decided to take on the role of a producer.  What --when you're a freelancer, you don't choose your role.  It gets flung at your face and it's either you say yes or no.  If you need to buy that new Wii console, it's a yes. 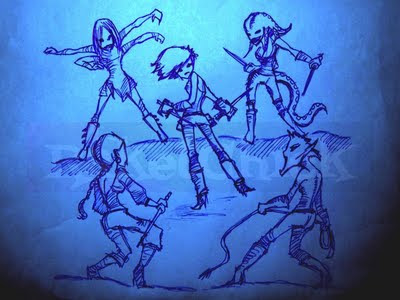 Suddenly, I was in a spot where I had to talk to the client, the talent manager, the production house, the recording studio.  I had to plan for numerous people.  Set separate schedules.  Negotiate a variation of fees.  Run up a huge tab on transportation, mobile phone, coffee, and emails.  Get bitched at and had to take everything with a goddamn, immaculate smile!  It was like a gang bang and I was begging for it!

Well, it was quite an experience.  One that taught me a valuable lesson in synchronization, meticulous detail-watching, good demeanor, unbreakable patience.  I did ok, but I still sucked by real producer standards.  Big time!

That week, I had renewed respect for the producers I have worked with when I was still in the rat race.  Those very people I have loved and bullied at the same time.  What you do is completely magical!  Hats off to you guys!  And if I get a bigger budget on my next project, I would happily pass all of this on to you.