Translation here.  In the seedy side of the advertising world, 'Raket' and 'Kalakal' are colloquial terms meaning the exact same thing.

Now what if two mavericks working the same line of business happen to collide?  Will there be gun-slinging, samurai-slashing activity?  Well, that's the neat thing about Creative raketeers.  They're cool with people doing their own thing and so they're cool with keeping to their own.  There is decency in what glamorous, corporate advertising heads would call 'indecency'.  And rakets are usually hush-hush anyway.  Nobody tells anyone which client he's actually nabbed and no one is about to ask.  So if there are potential freelance snakes-in-the-grass, that would be very rare.

Anyway... I met the Kalakal Kid on my first job in advertising.  Boy, was he ablaze with rakets!  Left and right!  Lunch time, overtime!  And he did it so discreetly that no one even knew he was doing it.  In everyone's eyes, he was a clean-as-a-whistle model employee. 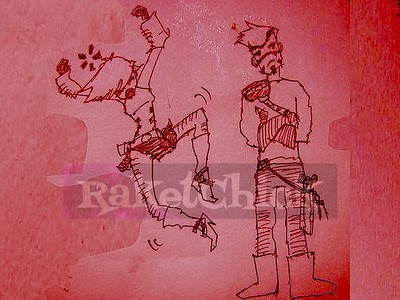 I would've felt envious (and maybe even threatened) if both of us were in the same league.  But we weren't.  I'm a writer.  He's an art director.  Instead of battling it out for sideline supremacy, we'd be better off working together and setting up our own raket empire.  We'd be better off a team, a complete package, a better marketing tool to clients.